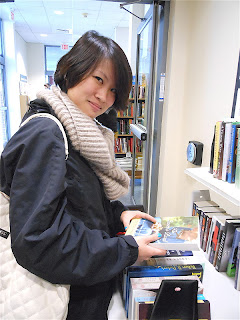 By Mike Lauterborn
(for Westport News)
12/3/11
Westport, CT – The volumes were carefully chosen, neatly placed on tables row upon row, and in pristine condition -- highly appropriate as gift selections for the browsing holiday shopper.
So when the annual December book sale commenced at 9 a.m. Saturday morning at Westport Public Library, 20 Jesup Road, locals with gift lists in hand swooped in en masse to grab up great bargains on not only books, but CDs and even a few paintings as well.
“We do this at this time of year as the books we select are very gift worthy,” said Mimi Greenlee, the library’s book sale chairman. “It’s a great early shopping opportunity. And the three oil paintings for sale were done by Joanne DeBergh, the late Westport/Weston artist, who had been a silent screen star.”
The halls in the lower level Joan and Smilow Wing, as well as the McManus Room, were packed with foot traffic as people perused book jackets, cradled selections or dropped volumes in tote bags they had brought for the occasion.
Posted by Mike Lauterborn at 7:05 PM No comments: 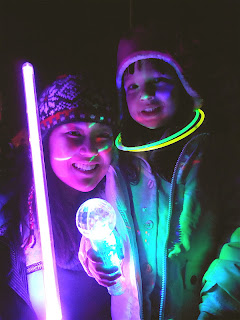 By Mike Lauterborn
(for Fairfield Citizen News)
12/2/11
Fairfield, CT – Some compared the scene to a Norman Rockwell painting. Others to Bedford Falls in “It’s a Wonderful Life.” One mom told her youngster it was like New Year’s Eve. However you viewed it, it was a favorite town celebration – a joyous occasion uniting families in the spirit of Christmas.
On Friday evening, hundreds of area residents gathered together on Fairfield’s Town Hall Green to witness the annual tree lighting and partake in related festivities. The latter included the distribution of glo-light necklaces, free hot chocolate provided by the Town Youth Council and the singing of Christmas carols by students from the town’s three middle schools as well as Fairfield Warde High School.
All manner of headgear – elfin ears, antler attachments, Santa hats -- could be seen throughout the crowd and almost everyone held a glowing device, from headbands to light sabers and glow sticks.
Carol singers stood in rows along the front steps of Town Hall, which was bathed in light and adorned with wreaths in every window. Onlookers pressed against barricades opposite them, savoring their voices, which carried across the site through strategically positioned speakers.
As the choirs completed their performances, First Selectman Michael Tetreau said a few words of welcome, thanked all the organizers that made the event possible and introduced fellow town officials. He then led the collective countdown from ten whereupon the community evergreen, planted in 1921 by the Eunice Dennie Burr Chaper of the National Society of the Daughters of the American Revolution, was illuminated.
Of course, there was an evening highlight yet to come, and that was the arrival of a certain jolly fellow called Santa, along with Mrs. Claus and assorted friends. Led by a fire department escort car, St. Nick rolled in atop Engine 2, waving to the crowd as the big red truck lumbered down the Old Post Road, sirens blaring and lights flashing. The entourage turned onto Beach Road and pulled up in front of Town Hall, perchance to meet and greet pie-eyed children.
In the minds of many, the holiday season had officially begun and the holiday tree, one of the tallest in the state, would stand as a beacon for all to admire through the merry season.
Posted by Mike Lauterborn at 7:01 PM No comments: