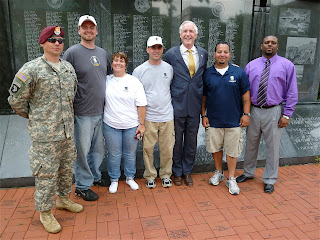 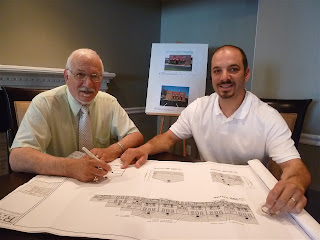 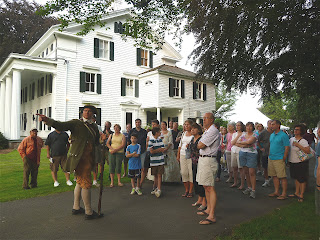 Costumed characters
recreate history
By Mike Lauterborn
(posted to Fairfield.Patch.com 7/8)
© 2011. All Rights Reserved.
7/7/11
Fairfield, CT – They strolled, they stopped, they strolled some more, and with each step, they learned a little more of the story behind one of the most dramatic, and tragic, periods in Fairfield’s history.
Thursday evening, costumed actors associated with Fairfield Museum & History Center, 370 Beach Road, led about 80 people on a lively tour of significant sites and historic homes, on or adjacent to the Town Hall Green, that played a role in the July 7, 1779 Burning of Fairfield 232 years ago to the day by British troops. The actors assumed the identities of prominent citizens whose homes were destroyed, and they read actual testimony penned by them.
Standing in one of the Museum galleries at the center of which a 3D map of a four-mile square of the surrounding area had been placed, Walt Matis, the Museum’s coordinator of volunteers, said to the crowd, “Most of what you’ll hear tonight will be the real words of the people that experienced the burning. And when we refer to Fairfield, in 1779, that included Weston, Easton, two thirds of Westport and the Black Rock section of Bridgeport.”
Matis explained that the American Revolution began in April 1775 and word reached Fairfield on April 22. The town sent a contingent of troops to Lexington, Massachusetts. More Fairfielders fought in New York in 1776. On April 25, 1777, British Major General William Tryon landed at Compo Beach, marched to Danbury and burned 20 houses there. On Tryon’s return to the shore, his force of 1,800 battled with patriots in Ridgefield.
Convinced that if he attacked the Connecticut coast, Tryon was sure General George Washington would send troops to defend it. Seeing an opportunity to spring a trap, Tryon attacked New Haven July 5, 1779. Fairfielders assisted with its defense and Tryon was repelled. He did not go far, however.
On the morning of July 7, Fairfielders were awakened by a cannon shot at Black Rock Fort in the harbor there, then the second largest port in Connecticut. Tryon’s ships were approaching. A heavy fog cloaked their arrival and it was not until 10 a.m., when the fog dissipated, that anyone realized the ships had anchored. Tryon waited five hours, until the tide was high, to send his troops ashore. By 4:45 p.m., they had taken the Green.
“Eight hundred troops landed, with two cannons,” said Matis. “The forces included Grenadier Guards, a King’s American regiment (comprised of Loyalists) and Hessians. They came up Beach Road, encountering some 30 militiamen, who fired upon them. The militiamen retreated to the Round Hill Road area. Tryon read a proclamation on the Green, essentially asking locals, ‘Why pursue ruinous resistance?’”
From the Museum, Matis led the group to the nearby Sun Tavern, then along to Edward’s Pond, where three actors took turns reading their testimony of the events. Playing the part of Ann Nichols, wife of Hezekiah Nichols, Mary Ellen McLean shared, “One of the soldiers came to me and with strong hand, robbed me of the buckles out of my shoes. I was treated with extravagant, insulting, and abusive language, and threatening at my own house. They destroyed almost every thing of furniture.”
At the steps of Thaddeus Burr’s home – the original was burned during the attack – actor Jill Littig, as Thaddeus’ wife Eunice, read, “A pack of the most barbarous ruffians came rushing into the house, and repeatedly accosted me with, ‘You damn’d rebel,’ at the same time stripping me of my buckles, tearing down the curtains of my bed, breaking the frame of my dressing glass. They were permitted to pursue me, throw me upon the ground, and search me, pulling and tearing my clothes from me.”
The group followed Matis from the Burr property east on Old Post Road, attracting curious looks from passing motorists, to Town Hall Green. There, Matis noted that, by 7 p.m. on the 7th, British troops ashore numbered 2,500, with the addition of 1,700 soldiers commanded by British General George Garth. Seeking to destroy Black Rock Fort from the rear, the force made its way east to cross the Mill River Bridge, but local farmers pulled the bridge down and thwarted any further movement forward. In retaliation, it is believed Tryon ordered the burning of houses.
“One of the first set afire was Isaac Jennings’ home, then the residence of the Abel family, since rebuilt as Benson home,” said Matis, leading the procession down Beach Road. About eight homes were burned that evening. The majority of the destruction would occur the next day.
“On the morning of July 8, over two hours, Black Rock Fort and British ships exchanged fire,” said Matis. “By 8 a.m., the British started to leave town, setting more fires in their wake.” In all, 97 homes, 64 barns, two meeting houses, one church, the county jail and numerous outbuildings were burned in Fairfield.
When General Washington passed through the area ten years later, he wrote in his journal, “I saw the late deprivations of the war, chimneys with no home, burned structures by the road.”
Fairfield history would be forever changed by the events of July 7 and 8, 1779.
Posted by Mike Lauterborn at 6:11 PM No comments: