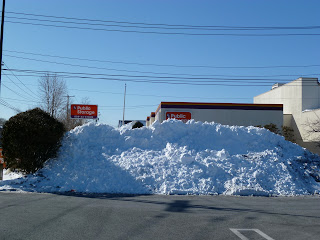 Snowbanks top light poles, rival icebergs
(Posted to Fairfield.Patch.com 1/24)
By Mike Lauterborn
© 2011. All Rights Reserved.
1/24/11
Fairfield, CT – If you’ve been out and about town, you’ve seen them. Massive mounds of snow taking on iceberg proportions and transforming local landscapes into lunar horizons. Most did not occur naturally but are the result of the bulldozing and plowing of snow accumulations received over the past month.
You are likely to encounter them at retail centers, schools and other public venues that have adjacent parking lots. Like space boulders, they contain rock and debris and are frozen through and through. Unless there’s a defined and long-lasting thaw in the near future, expect to see these behemoths well into April, particularly if current arctic temperatures hold and additional snowfall arrives.
To that regard, the National Weather Service calls for a high of only 14 degrees today, a 30% chance of snow on Tuesday and an 80% chance of a snow and sleet mix, accompanied by gusts as high as 29 m.p.h., on Wednesday. New precipitation amounts of between 1 and 2 inches are possible by Wednesday night.
Think warm thoughts Fairfielders and keep your earmuffs, shovels and snowscrapers at the ready. Old Man Winter’s going to be sticking around a while.
Posted by Mike Lauterborn at 1:09 PM No comments: 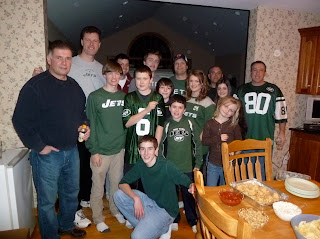 AFC battle with Steelers draws friends together
(Posted to Fairfield.Patch.com 1/23)
By Mike Lauterborn
© 2011. All Rights Reserved.
1/23/11
Fairfield, CT – It was the much anticipated AFC Championship showdown in Steel City between the New York Jets and Pittsburgh Steelers. Football enthusiasts across Fairfield were planted on bar stools and dug in at home ready to witness history.
A dedicated Jets fan, Woods End Road resident Ken Kubel was one of many hosting home festivities and had pulled out all the stops. The main feature: an 8-foot wide x 4-foot high screen and hi-def projection unit with mini tower speakers for surround sound effect. This was set up in a 24’ x 20’ back family room with vaulted ceiling in which several couches and recliners had been arranged.
In the spacious kitchen, a dedicated, fully-stocked beer refrigerator had been established along with a full chili-and-fixings table and secondary snack set-up with bacon bread, chips, salted nuts and dips. In the wings, sausage and peppers, sandwiches and buffalo chicken nachos.
Attendees, wearing the green given a majority Jets backing, began trickling in early while the Green Bay Packers were completing a mostly dominant 21-14 performance against the stubborn Chicago Bears in the earlier NFC Championship.
Among the arriving Fairfielders was Mill Plain resident Paul Mucha, Lawrence Lane’s Will Silbert and Woods End Road’s Dave Pierpont and Curtis Clarke. Among out-of-towners were Sheltonites Carl Leonzi, Brian Pisanelli and Kevin Sands; Monroe resident John Evans; and Stamford’s Diane Mucha.
There was also a generous helping of youngsters, who had mimicked their elders with jerseys and warpaint, and wives.
“Just as last week (against the Patriots in the AFC Playoff), again the Jets are underdogs, but I believe it’s going to be the same turnout – another Jets victory and we’ll be going to our first Super Bowl in 42 years,” Kubel said, referencing the team’s 1969 win. Since, the Jets have played for the conference title in 1982, 1998 and last year, but never made it back to the Big Dance. In contrast, the Steelers hold six Super Bowl trophies.
The game time temp in Pittsburgh was 15 degrees – 5 with the wind chill – and fans were bundled. It was no warmer here at home, and the house crew was glad to be indoors.
The Steelers had first possession, with QB Ben Roethlisberger on point, and ate up more than nine minutes of the clock to achieve a first TD and take a 7-0 lead.
“The Steelers managed their time well, keeping the Jets offense off the field,” observed Sands, “but New York could turn around and score right now.”
Unfortunately, Jets QB Mark Sanchez couldn’t put a good reply together and the score held at the close of the first.
“I think the Jets are biding their time… but they can’t bide too much time,” said Pierpont. “This game will be won in the second half.”
In the early minutes of the second quarter, NY had a lucky pick-off on a 4th-and-1 Pittsburgh push, but again couldn’t produce.
“Typical. Jets, Mets and Nets,” said Carl Leonzi, a Yankees, Rangers and Giants fan. “They don’t look anything like last week,” he added, going against the grain of the crowd.
New York’s lackluster resulted in another Pitt score – a field goal – with seven minutes left before halftime. At the two-minute mark, Roethlisberger pushed the score up again, running in for a TD, making it 17-zip. “Let’s go Rangers!” Kubel mocked, then, “Time to move on to hockey!” Someone else cried, “Who wants to buy my sweatshirt?” referring to his Jets-logo’ed attire.
The pain didn’t stop there when, seconds later, Sanchez was clobbered, fumbling the ball to allow another Steelers TD. While New York mustered a last second field goal, the Steelers were rocking a 24-3 lead at the half.
Jets fans were despondent but still hopeful. “We need to rally and explode in the next half,” said Matt Kubel, 10.
Kubel may have lit a fuse with his remark as, three minutes into the third, Santonio Holmes caught a Sanchez bomb and scored, closing the gap 24-10. How quickly hope returned to the room… and things started to happen… an interception mid-3rd, a couple of sacks; long pass connects.
The score held going into the 4th and the Jets kept pushing. Mid-4th, they were at the goal line knocking but couldn’t get in. In a twist, a safety resulted, pushing the score to 24-12, Steelers. A follow-up drive punted the score up to 24-19. From oblivion, they’d re-emerged as contenders.
“They’ve pulled this kind of thing off in the regular season,” said Kubel. Hopefully they haven’t climbed back for nothing,” said Silbert.
Unfortunately, it was all for naught, with NY allowing first downs that led to their demise.
Cries of “Let’s Go Packers” closed the party in the Kubel house. “Better luck next year,” said the host.
Posted by Mike Lauterborn at 7:31 AM No comments: 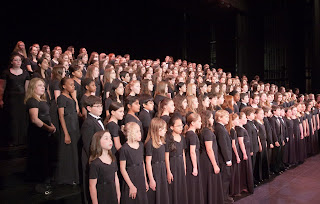 Fairfield County Children’s Choir set for Feb. 5 revue
(Posted to Fairfield.Patch.com 1/23)
By Mike Lauterborn
© 2011. All Rights Reserved.
1/21/11
Fairfield, CT – The dedication and energy of a handful of Fairfield-based young people has been a plus behind the activities of the Fairfield County Children’s Choir, which is set to kick off 2011 with its annual Broadway revue.
The annual event, its Broadway Concert and Auction, is scheduled for Saturday, Feb. 5 at 7 p.m. at the Klein Memorial Auditorium in Bridgeport. The performance will feature medleys from the Broadway musicals Wicked, Crazy for You, Annie and Barnum, be accompanied by the FCCC Orchestra and offer solos from soprano Stephanie Gregory as well as many of the choir’s own stars. The choir is a community-based choral program made up of over 250 children in grades 4 through 12 from communities in Fairfield County and beyond.
“I’ve had nine amazing years in the choir, including seven years in the Chamber Singers, which is one of four divisions – the most advanced – of the choir,” said Rachel Philips, 18, a senior at Fairfield Warde High School. She explained that the other divisions of the choir include the Chorus, the Chorale and the Concert Choir. Each performs both individually as well as part of the whole.
“The first rehearsal the first year I was doing this was a little overwhelming,” recalled Philips. “I walked into a room with 250 other kids and asked myself ‘What am I doing here?’ But by the second month, it became so second nature. The first public performance I had was a winter show. You’re always both excited and a little nervous about the unexpected. Now, nine years later, it doesn’t faze me at all.”
Philips is the newly-elected president of the Chamber Singers, a promotion about which she is excited. “It comes with a lot of responsibility and has taught me a lot about leadership. Choir is such a place wherein you can make friends and be with people who like to do what you do. It also provides such a strong foundation for basic musical concepts. Our choir director Jon Noyes likes to say ‘Have fun being awesome’ which we take very seriously.”
Fellow choir member Alyson Leppla, 17, and Philips have shared a similar path. Like Philips, Leppla started with the choir nine years ago, is part of the Chamber Singers and is also a student at Warde. “Rachel and I were friends in elementary school (North Stratfield) and joined the choir together. We’ve really grown up together. It’s nice to see someone else stick with it like I have for so long. It’s been very exciting – the people we’ve gotten to work with, the trips. I’ve had opportunities that I wouldn’t have had elsewhere. And even though there are a ton of singers, you really get to know everyone, particularly in your specific group.”
Leppla wasn’t sure if she would make singing a career, but expected to pursue it at an extracurricular level through college.
The newly-elected vice president of the Chamber Singers, Max Rein, 17, a student at Fairfield College Preparatory School, weighed in with his unique perspective as a male in the choir. “I’ve been in the choir for nine years, which is unusual for a guy given voice changes. In fact, I’m only one of maybe four males in the choir to have continued in the program so long. My older sister had been in the choir for many years before me and encouraged me to join. For about two years, we were actually in the program together, which was a unique experience given our four-year age difference.”
Rein recalled the highlight of his choir career. “The most exciting moment for me to date was performing at Carnegie Hall. I was a freshman, and to be in a world renown concert hall where so many incredible singers have performed was such a privilege.”
The Concert event includes a silent auction that opens at 5:30 p.m. and will feature a wide range of items including tickets to the Westport Country Playhouse, spa/beauty treatments, gift certificates to local restaurants, Pinkalicious books signed by best-selling author Victoria Kann, and a Lillian August gift basket.
Tickets to the FCCC 2011 Broadway Revue are $15 and $20 and will be sold the day of the performance. For more information, contact barbarabfccc@snet.net
Posted by Mike Lauterborn at 7:28 AM No comments: