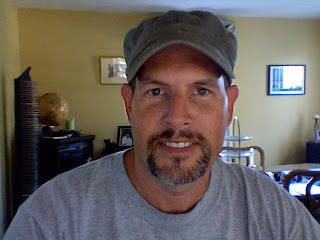 (New column intro, ran in Fairfield-Citizen News Sept 3)
By Mike Lauterborn
© 2010. All Rights Reserved.
8/27/10
When Editor Gary Jeanfaivre and I met for coffee at downtown’s Las Vetas Café one recent late summer morning, the aim was to get to know each other a little better and figure out how my particular writing style and unique way of looking at the local scene might best work in a fine hometown paper like the Fairfield Citizen.
I had always thought there was a void when it came to reporting not news events necessarily but just the average goings-on of life in Fairfield. Sometimes, just what happens around us during the normal course of the day is news. Sitting for a spell at the local bookstore. Browsing through a gallery. Wine tasting at the corner liquor store. Dining at sunset at the beach. Strolling around Mohegan Lake as the fall colors begin to show themselves. Taking a car ride up by the reservoir.
By covering these average slices of Fairfield life, I hope to convey the certain vibe and wonderful privilege it is to live in this town. A buoyant energy. An amazing community spirit. A pride in who we are, how we conduct ourselves and how we enjoy our lives here. What’s it like to live in this town?
In this new column that, we hope with your support, will become a regular feature of the paper, I will answer that question. And I will do it through these vignettes and slices of local life. And as I encounter its citizenry, I will incorporate them as well.
I have lived in Fairfield for 14 years now. Raised two fine sons here who attend its high-caliber schools and benefit from its hard-working teachers. Seen the town change from a sleepy place with capes and cottages to a very vibrant and affluent shore-side hot spot. Mourned the loss of colorful retailers like Mercurio’s and the Fairfield Store but been thankful for the economic surge that new retailers have brought and recognize that change is inevitable.
Are there more qualified citizens to speak about Fairfield? Those with deeper memory banks or who are more integrated into the workings of this town? Sure, and I hope to profile them. But I feel I’m about as big a fan as you’ll find and, while I’ve cycled its streets, trod its beaches and walked its wooded areas, I continue to make new discoveries and find amazing points of interest.
As such, could the new column title – “Man About Town” – be more apt? Not only will I be speaking about Fairfield, but I will be out and about Fairfield. Where will I pop up next? What new stories and captures will I have to share with you?
My hope is to create a whole series of little images that when placed all together will form this gallery showcasing the area -- from the farthest northern reaches along the Easton border and eastern portions that abut Bridgeport, to the western border with our neighbor Westport and southern shoreline looking out on Long Island Sound. And through these images I hope to infect you with the same passion and positive spirit that I have come to know and, together, to champion this place to everyone we encounter.
So keep your eyes peeled as I file my reports from venues near and familiar. You never know where I’ll be next but you can bet I’ll be taking it all in and loving every minute of it. Cheers, Fairfield. Be catching you again soon.
Posted by Mike Lauterborn at 11:23 AM No comments:

Whooo's Better Than Wildlife In Crisis? 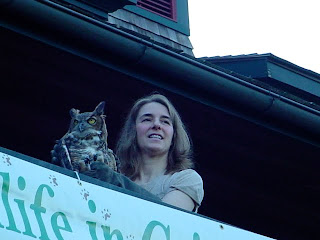 Whooo’s Better Than Wildlife In Crisis?

(Ran Sept. 3 in Westport News paper & appeared online)
By Mike Lauterborn
© 2010. All Rights Reserved.
8/31/10
Greenwich, CT – They’re among the hardest working people in the wild animal rescue business, they do it all on a volunteer basis and their greatest reward is to see their clients return to their natural habitats.
On Sunday, August 29, the non-profit Wildlife in Crisis (WIC) organization held its annual fundraising event at the Greenwich Audubon Center. The highlight was the release back into the wild of two Great Horned Owls that had been rescued and rehabilitated at the Weston-based clinic.
The event was supported by Westport’s Black Bear Wines and Spirits, which was conducting a tasting and planned to contribute a portion of any wine sales. “Animals’ fearlessness and resilience to injury is an inspiration,” said Black Bear spokesperson Denise Iulo. “It is so important to protect wildlife in our community and the environments in which they live.”
Besides the wine, supporters, numbering over 100, enjoyed bottled and draught beer, hors d’oeuvres and other food provided by WIC volunteers. Forty-two items ranging in value from $25 to $10,000 were also donated for a silent auction while another 40 items were contributed to a raffle.
Jeff Schultz, CT Wine Director for importer Vinifera, coordinated Black Bear’s tasting table, just outside Kiernan Hall in the Audubon facility’s Kimberline Nature Center. “It’s white wine weather,” he’d decided, referring to the day’s clear blue skies and temperatures in the 80s. To that regard, Schultz poured a Sant’ Elena Sauvignon Blanc, of which only 900 cases are made annually, along with two fine Italian red wines.
From the wine station, paw print stencils on the floor led into the hall where the event, co-chaired by WIC volunteers Amy Jenner and Janice Vitale, was mainly concentrated. Amongst the merchandise tables, WIC foundation co-leader Peter Reid manned the beer bar. He explained, “WIC has been serving Fairfield County since 1988. My wife Dara founded the organization. Now we treat over 5,000 wild animals each year – everything from hummingbirds to white-tailed deer. The area is an attractive habitat for wildlife – coyotes, turkeys, even moose. As such, there’s a lot of potential for human/wildlife contact. Birds hit windows, fawns are orphaned, animals are hit by cars. Our mission is to ameliorate human/wildlife contact.”
When there is a harmful interaction, WIC nurtures and rehabilitates animals back into the wild. Private citizens and local philanthropic groups provide all funding, which goes directly to caring for wild animals in need and maintaining the organization’s 10-acre plot adjacent to Weston’s Devil’s Den preserve. The group operates an animal hospital/clinic with flight cages for owls and hawks, others for songbirds. Volunteers are high school interns, college recruits and local people passionate about animals.
“When someone finds an injured animal,” explained Reid, “they bring it to us. We’re set up for minor surgical procedures but work closely with South Wilton Veterinary Group for advanced surgeries and splinting. Then the animals are brought back to the center for recovery. Many have to be rehabilitated for months.”
Dr. Nick Sitinas heads up the South Wilton facility and was in attendance with three of seven of his staff doctors -- Diana Chung, Clare Fahy and Louisa Martin. As to why WIC has partnered with their group, Sitinas explained, “We’re one of the only board certified avian specialists in the area trained to deal with a wide variety of species. Shortly after we were established in 1994, Dara began bringing cases to us.”
Andrew Pollino, 13, was sad that his summer term as WIC’s youngest volunteer had ended. “I thought they could use extra help and Amy said she’d be delighted to have me. My first task was to re-mulch a path. By the end of the summer, I was handling squirrels, feeding birds and cleaning cages. It’s been so much fun to work with animals and has given me the idea to become a veterinarian.”
WIC volunteers Kate Backel, 22, Julie Schmidt, 60, and Anna Clark, 24, displayed WIC-branded fleece jackets, tees, hats and totes. Clark mentioned an injured baby crow she nurtured back to health during her internship at the Center. “He was in really rough shape when he arrived at WIC, and after several months of rehabilitation we were able to release him.”
Founder Dara Reid was very pleased with the turnout. “I’m grateful to everyone that came out to support us,” she said, presenting certificates of recognition to a few select volunteers and the South Wilton Veterinary Group for their assistance. She then encouraged the gathering to join her at the back of the building for the owl release.
From a second floor balcony, Reid took the first owl, orphaned as a baby, and set it free. It spread its massive wings and soared away over a tree line. Then she released the second owl, which Jenner had nicknamed Oscar. It took off over a field of wild daisies in the direction of the setting sun.
Looking on, WIC intern Laura Cummins, 21, commented, “The work we do is so meaningful and important. But when you finally get to see a release like this, that’s the true benefit of all our time and energy. This program has been the most amazing of my life!” 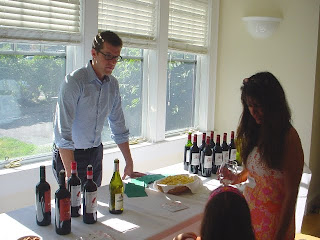 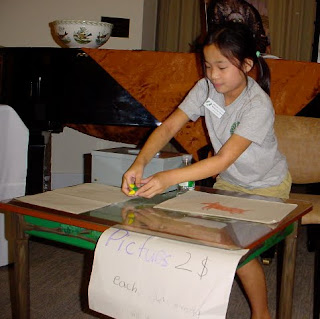 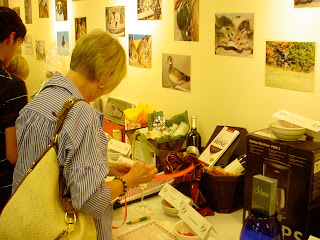 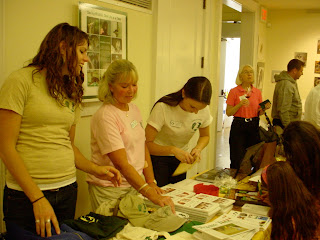 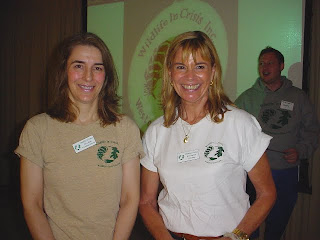 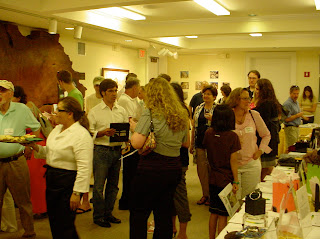 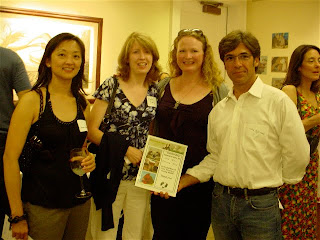 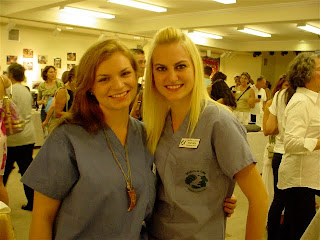 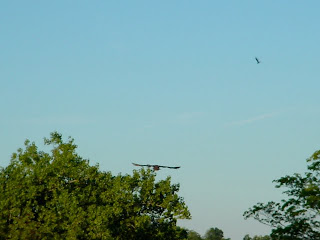