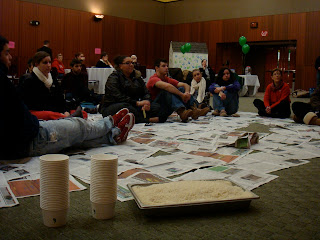 (Appeared on
Fairfield.Patch.com 12/7)
By Mike Lauterborn
© 2010. All Rights Reserved.
12/7/10
Fairfield, CT – As they arrived at the large banquet hall, students didn’t know if they would be dining in style or squatting on newspaper sharing a community bowl of rice. It was an eye-opener for many and lesson about the challenges of hunger and poverty in the world.
The draw was a Hunger Banquet organized by Gail Gillespie, 20, a junior at Sacred Heart University and the site was the University Commons room on the Park Avenue campus. The event was held from 7 to 9 p.m. on Monday Dec. 6.
About three dozen students and a few adults participated and each assumed the role of a fictional person in society. Their identity was determined by selecting an index card from a basket set on a table at the entryway. Cards were marked either Low Income, Middle Income or High Income, and included a fictional first name and short bio that would be representative of a member of that particular class.
If a student chose a High Income card, they were ushered to a large round table dressed with linens and silverware and served by a uniformed waiter a feast of pasta, rolls, salad and a choice of water or soda. If a student selected a Middle Class card, they seated themselves at a long table and could access an adjacent buffet of rice and beans with bottled water. A student picking a Low Income card had to sit on newspapers arranged on the floor, help themselves to a cup of rice and eat with their hands.
Fifteen percent of the cards had been designated High Income, representing the share of the world that falls into a category in which basic needs are amply covered and privilege is the norm. Thirty-five percent of the cards were marked Middle Class, equating to the portion of the world’s population in that group. The balance of the cards were tagged Low Income, symbolizing the more than 50% of the world’s population that lives below the poverty level and struggles each day just to survive and get basic food and shelter.
While driving awareness about hunger, the event served as a drive for donations of non-perishable food items. All collected food was to be provided to the St. Charles Food Pantry in Bridgeport. One pack of students rolled in with a shopping cart full of food that they had collected over the course of a couple of hours at the Martin and Seton Hall freshman dormitory.
“I was really satisfied with all we were able to collect, particularly since a lot of people weren’t around,” said Lisa Battista, 18, one of the students pushing the cart.
If arriving students did not have food to donate, they were required to contribute two dollars. One hundred percent of all funds collected will be distributed to needy individuals in El Salvador, when a delegation of 16 students travels there in March. Students spend up to eight days visiting with community members, determining who is most needy and meting out funds accordingly. Last year, $16,000 was raised and distributed.
Stephanie Stiles, 20, a junior from Hasbrook Heights, NJ, was participating for the second consecutive year and enthusiastic about the effort.
“I think it’s a great cause to raise awareness. We should have more events like this on campus. It’s what Sacred Heart is all about – giving back,” said Stiles.
The structure and activities of the evening had been designed by Oxfam America, an international relief and development organization that creates lasting solutions to poverty, hunger and injustice. The group provided coordinator Gillespie with presentation materials, publications and stickers. The campus food service, Chartwells, donated the food offered to event participants.
Gillespie and several other students presented facts about world hunger and poverty, interacted with the crowd and solicited participant feedback about what it was like to be placed in their respective socio-economic groups. Statistics were staggering including the fact that a child dies from hunger every 3.4 seconds and 860 million people worldwide suffer from malnutrition and chronic hunger.
Bill Haug, 20, a junior from Kinnelon, NJ, and 10 other students that are part of the El Salvador delegation, fasted for 30 hours, in effect suffering with real world sufferers. He said it was a challenge.
“You pray and remind yourself of the reasons you’re doing it. My experience is nothing compared to what people experience in the world,” said Haug.
Looking out over the room, Gillespie said, “I hope students that participated appreciated the message. I feel blessed to attend this university and go to the cafeteria and swipe my meal card. So many people in the world go without.” 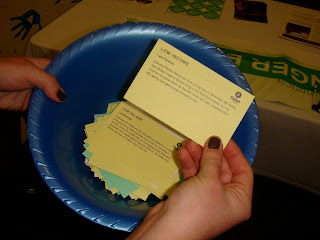 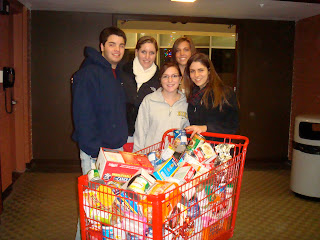 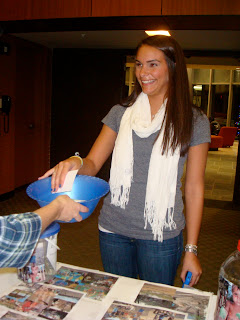 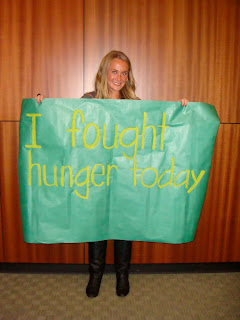 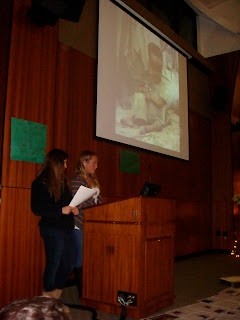 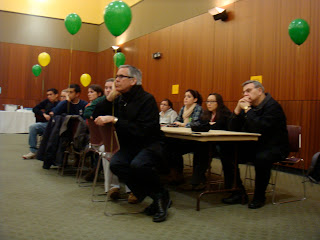 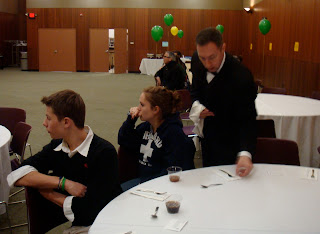 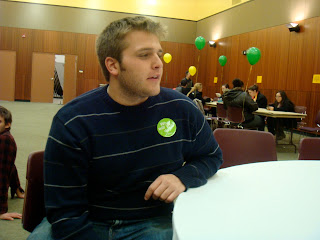 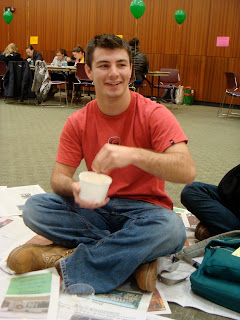 Posted by Mike Lauterborn at 2:42 PM No comments: