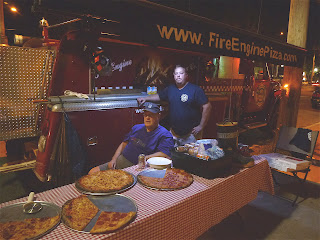 Brick oven pizza maker reinvents business after fire disaster
By Mike Lauterborn
© 2011. All Rights Reserved.
8/8/11
Black Rock, CT – “Large pizza to go,” said Marty McCarthy to his cook, his cousin Freddy, after receiving a cell call while standing in front of Acoustic Café on Fairfield Avenue in Black Rock.
This spot had become a regular one for him Friday and Saturday nights from 9 p.m. to bar close – Marty, that is, and his 25-foot long, candy apple red pumper fire truck that he had outfitted with a wood-fired pizza-making brick oven.
With the truck parked curbside and two long tables – one with pizza on platters ready to serve up slices and a second with pods of dough in a tub, he was a full-service mobile pizzeria.
This was not McCarthy’s first venture. In fact, he has been well known as the neighborhood pizza guy for a decade, when he first opened Marty’s Pizza at 2804 Fairfield Avenue. He operated that business, which was primarily take-out and delivery, for nine years, building a loyal following. He sought to expand to include a bar and sit-down tables.
So, in February 2011, McCarthy officially opened Marty’s Brick Oven of Black Rock Restaurant and wine bar at 2914 Fairfield Ave., two blocks down the road from the original business.
The business had a promising start and the neighborhood was welcoming. All seemed bright moving forward.
Then the unthinkable happened. On the morning of Saturday, March 19, Marty got a phone call from the chef at the time saying there was smoke coming from the basement.
“I rushed right over, knocked on the doors of the apartments above the shop first, to clear out any residents, and then came down, just as the fire department arrived,” he said.
The fire department set up, went in and did what they could in the tight space. Unfortunately, it was all for naught.
“It burned all damn day,” said McCarthy, with disgust. “There was tons of smoke. It was a total loss, only six weeks after we’d opened -- $200,000 in damage for me, another $500,000 for the building, residents in eight units suddenly homeless. It was complete devestation. It was my dream, and I was done before I’d even gotten out of the box.”
The so-called “Luck of the Irish” had visited McCarthy before and, actually, was what steered him into pizza-making in the first place. “I was a volunteer firefighter for six years before starting the pizza business, and the only reason I did that was because I couldn’t pursue a career as a firefighter, due to a severe motorcycle accident in which I snapped my left femur,” he said. “That was days before my agility test, one of the last steps to being a full-fledged paid Fairfield firefighter.”
With the fire disaster, McCarthy was left to think about how he was going to keep his name out there – as well as keep food on the table. “I was recently married and had a nine-month-old new baby daughter,” he said. “Mobile food isn’t anything new, so the challenge was to come up with something unique and that incorporated the pizza.”
Talk about irony: McCarthy hatched the idea to buy a firetruck – a 1985 International from Vernon, CT, through Craig’s List – and outfit it with a brick oven. “I worked closely with my oven importer, Tuscany Fire, out of New Haven,” he said. “It was a first for them. They’d already done a couple mobile units, for other types of businesses. The conversion process took two months.”
The opening gig with the truck was on Black Rock Day this past June. “It was great for me and a great day for Black Rock, showing the resiliency of the community to bounce back from tragedy,” he said. “Congressman Jim Himes had one of the first slices of pizza… other councilmen and Mayor Bill Finch were also there. There was a lot of support.”
At present, McCarthy and his Fire Engine Pizza truck maintain a presence in Black Rock a couple weekend nights every week, as well as do private parties and festivals, like the MTK Music Fest in the Hamptons August 13 & 14, as requested.
Looking to the future, McCarthy says he hopes to be back in his space in three to four months. Monday, August 1 was the scheduled demolition start date, to rip out all the burned interior and ruined equipment. Then an engineer will visit to see about reestablishing the floors, and the landlord will deliver “four walls and ceiling in September.”
Optimistically, McCarthy said, “We’re looking at a potential grand re-opening end of October, which will include the debut of an added 50-seat party room.”
Reflecting on all that has transpired, McCarthy said, “You can’t lie down and die. They say moss doesn’t grow on a rolling stone. You’ve just got to keep fighting.”
To order a pie or inquire about private party services or support for an event function, visit www.FireEnginePizza.com or call 203-257-8007 – “anytime” says Marty.
Posted by Mike Lauterborn at 4:01 PM No comments:

Talk About a Great Neighborhood! 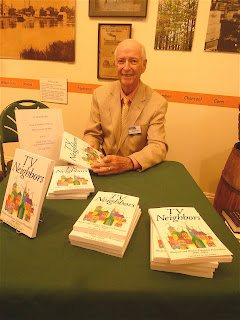 Talk About a Great Neighborhood!

At the Top of His Game: First Person Sports’ Keith DiBuono 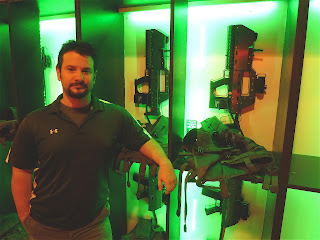 At the Top of His Game: First Person Sports’ Keith DiBuono

By Mike Lauterborn
(for Fairfield Citizen News)
7/27/11
Fairfield, CT – Armed with AK-47s, the squad split into two and fanned out… three guys crept right, making their way around cement barriers, looking through their gun sights, index fingers ready to squeeze off a round… three guys crouched and headed left, stealthily darting from one point of coverage to another. Suddenly, a flurry of shots ring out and someone cries, “Casualty!” Man down… but, surprisingly, not out.
This was a simulation after all, of a firefight between opposing teams of commandos in a post-apocalyptic abandoned airport terminal setting. And the firearms rely on infrared light technology instead of live ammo. Most surprising, the terminal sits in the middle of Fairfield.
All this action – and more – can be found at First Person Sports in its 4,200-square-foot arena located within the Sportsplex complex at 85 Mill Plain Road. Opened this past May, the facility is drawing teens, young adults, dates, families and party groups eager to experience combat – and video gaming – from a first-person perspective.
Thirty-five-year-old owner Keith DiBuono established the business as a mobile opportunity initially, in Westchester County, NY, in 2008. While the physical combat activity doesn’t employ lasers, it is popularly referred to as Laser Skirmish. Wearing military-grade tactical hydration vests, opponents aim high-tech weapons at each other and “fire off” shots with the goal of scoring hits on one of three sensors – one on the tagger gun itself, two on a player’s vest. Overall registered hits are tracked to determine which team is the winner in a battle. Rounds last around 10 to 15 minutes and limits are set on ammo and “lives”.
DiBuono’s brother-in-law, who was attending the University of Central Florida at the time, first played a version of Skirmish in Orlando, and suggested to Keith that he start a facility like it in the Northeast. DiBuono was working for a party facilitator as a costumed Elmo muppet character and wanted to break out on his own.
The type of laser gameplay that most people are familiar with is Laser Tag. It’s often played in a darkened room with neon vests, rudimentary weapons and a scoreboard. Laser Skirmish takes the experience to the next level in that the equipment is more sophisticated, can be taken outside and has a very long range – the smallest guns can tag up to 300 feet; larger guns up to 600 feet. DiBuono works with a distributor in Australia, one of only two manufacturers in the world that make the type of advanced equipment they use, DiBuono claims.
In its initial mobile form, First Person brought the weaponry and inflatable “speed” and “deluxe” field obstacles to the end-user. This would often be teens celebrating birthdays and looking to live out action movie fantasies or combat video game scenarios.
As Westport-based developer Hal Fischel was expanding Sportsplex, he reached out to DiBuono and invited the young entrepreneur to become a tenant. First Person made a good fit in a facility menu of businesses that already included rock climbing, archery, indoor skating and gymnastics.
In addition to the combat arena, First Person’s space includes a game lounge with modern couches, five monitors – four 42” LG’s and one 82” Mitsubishi rear-projection screen – and Xbox 360 game systems that play over 75 video game titles including Halo Reach and Call of Duty.
DiBuono designed the facility himself, including the arena and its features, which incorporate concrete, sheetrock and plywood, based on a battle mission setting. “I wanted to create a more immersive, multi-player battle experience like ‘Call of Duty, which is the most popular game among first-person simulations, wherein the user navigates a fight from the perspective of the soldier, staring right down the barrel of the gun and through the gun sight. The company name reflects that.
DiBuono has been a long-time gamer. “I started with Atari, went to Sega, Genesis, Nintendo, Nintendo 64, Playstation, Playstation 2, then Xbox,” he said, then added, “My brother, Eric, is a video game collector who owns every system that’s been put on the market. He just graduated from Fullsail University, in Orlando, which is basically a media university – music and film to video game design and modeling. He earned a degree in 3-D modeling and just finished rotoscoping the movie Captain America, taking frame-by-frame video footage and converting it to 3-D.”
As to other family members, DiBuono said, “My folks are very happy with what the business has become. I’m the first generation to spread my wings as an entrepreneur. This is the only facility of its kind in Connecticut, and the only facility in New England that has gone to this extent. We’re on the leading edge of this technology and I’ve thrown myself in completely. There are only 50 fields across the U.S. that use our level of equipment.”


DiBuono said Laser Skirmish is still relatively new. “It’s starting to roll out and become more popular and video game industries are learning about our equipment. It’s the future of the business.”
First Person Sports is located in the Sportsplex facility at 85 Mill Plain Road. For more information, pricing and/or membership packages, call 1-888-FPS-1337 or visit www.firstpersonsports.com online.
Posted by Mike Lauterborn at 3:53 PM No comments: