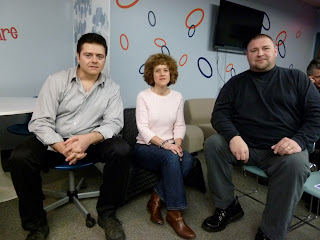 Ghosthunter team shares evidence at Fairfield Woods Library
(Posted to Fairfield.Patch.com 2/12)
By Mike Lauterborn
© 2011. All Rights Reserved.
2/12/11
Fairfield, CT – Ghostly images. Mysterious energy. Physical encounters. Strange faces. This was the evidence put forth by a pair of state ghosthunters with regard to their long-time work in the field of paranormal activity.
It was all part of a presentation given by Joseph Franke and Orlando Ferrante, founders of the Connecticut Paranormal Research Society, Saturday afternoon at Fairfield Public Library Woods Branch. The duo, with over 45 years of combined knowledge and experience, has established itself as one of the leading paranormal investigation and research teams in New England. To a full house of 60 attendees, they shared photographic imagery from ghosthunting excursions and related details of several cases they had worked on over the years.
One of the most remarkable cases occurred in Enfield in 2008, and still haunts the pair. As Ferrante related it, they were contacted by the homeowners who described that they had been seeing shadowy figures. A lot of the sightings and activity was centered around the couple’s twin daughters, who they later discovered had a gift of seeing the paranormal. They went to check out the home.
“We went a total of five times,” Ferrante said, “but were finding no evidence to validate the claims. On that fifth visit, we set up an infrared video camera in the girls’ room and had one of our investigators shooting still shots in the hallway outside their bedroom while we worked with a psychic downstairs. The psychic managed to channel a spirit that we felt was doing all the harassing. I used religious provocation to challenge the spirit and, through the psychic, it spit in my face and laughed at us.”
Things really became intense at that point. “Shortly thereafter, our investigator was attacked upstairs,” Ferrante said. “She was physically picked up off her feet and dropped to the ground. We ran upstairs and found total chaos. As we checked on the girls, we could hear loud growling. We controlled the situation, removed everyone from the room and monitored things for the rest of the night, which was quiet.”
The investigators expected the video camera might have documented the occurrence, but discovered the tape was gone when they began packing up their equipment. It went missing for over nine months before turning up mysteriously on top of a camcorder bag.
Ferrante reviewed the tape and, to his amazement, saw an anomalous object coming out of the crib, timed about two minutes after their investigator was attacked.
A second review showed one of the girls looking very agitated and whispering “sit down” in the direction of the investigator, at which point the woman was attacked.
Ferrante said the pair weren’t able to resolve the situation in the home. “While the homeowners were at first pursuing a course that may have allowed us to provide a house cleansing, the situation changed during the time the tape went missing. The homeowners ended up working with another paranormal group which contacted a television producer to film a paranormal episode for Animal Planet.”
The overall event still brings chills to the duo when they recollect it and, Ferrante said, “I feel the aggressive spirit there has managed to attach itself to my family through me. Let’s just say there have been some unexplainable occurrences over the past two years.”
This was just one incredible tale the pair related from their nearly lifelong experience in the field, which began for both when they were just children. In fact, Franke’s first interface came when he was three.
“My maternal grandfather and I were very close and spent a lot of time together. One night, while my parents were watching TV, I came out of my bedroom, apparently sleepwalking, and said I heard someone saying, ‘Joseph, come with me.’ Shortly thereafter, my parents got a call from my grandmother saying that my grandfather had passed away. He’d had a heart attack while sitting up reading the Bible in bed. That’s where the seed was planted that I had some kind of paranormal connection.”
Similarly, Ferrante had been surrounded by the paranormal since he was six. “I had the ability to sense spirits, see them and feel them. My mother would tell me it’s nothing, then later confessed to knowing I had a special gift and it was common to other members of the family.”
Later in life, both had the opportunity to meet and work with Ed and Lorraine Warren, who were the pioneers in the paranormal field and handled such high-profile cases as the infamous Amityville mass murders in 1974.
In 1995, through a mutual friend, Franke met Ferrante, they decided to branch out on their own and formed the Connecticut Paranormal Research Society.
“We are committed to researching the unexplained and try to assist people who feel they may have paranormal disturbances,” said Franke. “A very small percentage of the cases we look into turn out to be paranormal. Often they are psychosomatic. We do a lot of upfront research and screening before we take a case.”
The pair say television doesn’t accurately represent what goes on in the field. “There’s a lot of hard work in researching and family sacrifice. We may work on a case for nights, weeks, even years. We’re about finding resolution,” said Ferrante.
They don’t profess to have all the answers but just share their experience. “We’re like Fox News. We report, you decide.”
Posted by Mike Lauterborn at 11:42 PM No comments: 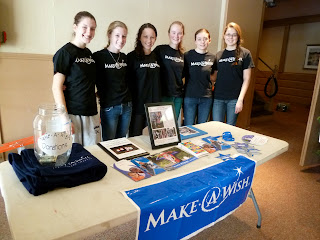 FLHS Club holds fundraiser at Community Theatre
By Mike Lauterborn
© 2011. All Rights Reserved.
2/12/11
Fairfield, CT – The lobby area of Fairfield Community Theater was abuzz with excited children, caring parents, thoughtful teens and a big green fellow named Shrek.
The occasion Saturday morning was the 8th annual “Movie Madness” event, a fundraiser hosted by the Fairfield Ludlowe High School Make-A-Wish Club, at the popular downtown movie house. The featured presentation was “Shrek” and, while free, donations were being accepted with all proceeds going to support the Make-A-Wish Foundation of Connecticut.
Explained FLHS student Melissa Warten, 17, “The Make-A-Wish Club of FLHS is a group devoted to raising funds for children with life-threatening medical conditions. This is one of our most popular fundraisers and we do it annually. The kids from all around town love coming to the movies and it helps us with donations. There are 30 of us in the Club this year.”
With regard to how Warten became involved with the Club, she said, “We have an activity fair every September advertising all the school clubs. When I saw this one as a freshman, I thought it would be interesting and looked into it. I’ve ended up sticking with it for three years and plan on being an officer next year.”
Speaking about the event, Sydney Kay, 16, a fellow volunteer, said, “People that donate today get to see our featured movie and will receive information about the club and organization and who it benefits. Kids can also write their names on paper stars, which we tape to a banner. We have wristbands, too.”
Another volunteer, Libbey Walker, 18, said the event has been successful over time. “We’ve been doing this since 2003 and have raised over $15,000 during that time. That has allowed us to grant two wishes and we’re close to granting a third. It takes about $5,000 or more per child.”
Kay said it’s a rewarding effort. “After a child takes advantage of their wish, they come back to us and tell us about their experiences. Usually we also get thank you’s from their parents, too, who tell us how the experience allowed them to forget about all the doctors for a couple of days and enjoy being a family again.”
Fairfielder Kirk Shankle and his daughter, Amelia, 6, were glad to support the cause. “It seemed like a good event, to help out Make-A-Wish, and gives Amelia the chance to see ‘Shrek’ on the big screen. Being a parent, I can’t imagine having a child in this situation. To help in a small way is great.”
Fellow Fairfielder Scott Meurer, attending with his daughter Zoe, 6, said friends had told him about the event and he was just learning about the organization, but that “it seemed like a great cause and a fun morning.”
Dan Kelly, with his children Devin, 3, and Mairead, 2, agreed with Meurer. “This is a great cause and great thing to do in cold weather. This is also my children’s first movie house experience.”
Posted by Mike Lauterborn at 4:10 PM No comments: