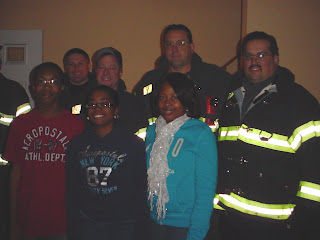 Fairfield & Bridgeport fire dept’s assist family displaced by fire
(Posted to
Fairfield.Patch.com 12/21)
© 2010. All Rights Reserved.
12/21/10
Fairfield, CT – This was one emergency call that firefighters at Jennings Road Engine 2 Fire Station were glad to receive.
The call came from Terry O’Connell of Bridgeport Engine 12 on behalf of the Bridgeport Firefighters Christmas Family Fund. O’Connell was seeking their support in helping deliver a holiday bounty to a Bridgeport family that had lost their home to fire and been temporarily relocated to Fairfield.
The family – Sheronda Jackson and her children Jamil, 12, and Shayla, 17 – had lived in a home on Adams Street in Bridgeport until fire gutted it on November 28. They initially went to live with a grandparent in Norwalk until Sheronda’s company, Onward Healthcare, at which she is a compliance coordinator, stepped up to cover an apartment rental for a period of six months. The apartment is located at 114 Brentwood Avenue, less than a mile from the Jennings Road station.
The Fund was started eight years ago by a retired Bridgeport firefighter, Bo Diaz, and his daughter Haley. O’Connell explained that every school in the city of Bridgeport has a social worker assigned to it and they help the Fund’s committee identify deserving families. The needy are also identified through churches and community organizations.
The Fund is 100% supported by donations. This year, $40,000 was raised, which is “down about half” from the previous year, said O’Connell. Donors included Firefighters Union Local 834, Al’s Angels and private citizens. In 2009, the Fund helped 45 families. This year, 40 families, which include about 140 children, are being assisted.
Typical help includes food baskets, toys and meals. The meal is a complete family Christmas dinner including a spiral ham, a turkey, all the fixings and even dessert.
“We almost weren’t able to do the food baskets,” said O’Connell. “Then Paul Crisci of Port Group Solutions in Monroe stepped up with $1,000 which allowed us to cover our funding gap due to an increase in food costs. He was one of our big angels this year.”
As a convoy of vehicles was prepared to make the short hop over to the Jackson’s temporary quarters, Fairfield firefighter Rick Kazzi said of the effort, “It’s a good thing they do.”
Kazzi and fellow firefighter Bob Smith led the procession in Rescue 1 while the department’s Engine 2 and Ladder 2 trucks, as well as a Chevy Suburban carrying a team of Bridgeport firefighters, followed behind. As they neared the home, the vehicles sounded their sirens, which brought the Jacksons outside to their landing.


Firefighters scaled the stairs with gifts and holiday provisions – not firefighting gear – in hand, much to Sheronda’s relief. “I heard the sirens and said, ‘Oh, no, not again,” she said. As the family and fire personnel gathered in the home’s sparsely furnished front room and presents were placed under a modest tree in one corner, Sheronda shared her thoughts about the fire and being displaced.
“The fire was traumatic,” she said. “I’d never been through anything like that before. Without my job, I don’t know.”
Sheronda said they will have family from Norwalk over on Christmas Eve and celebrate Christmas in the three-bedroom apartment. 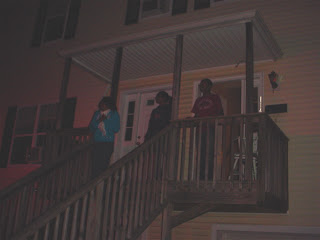 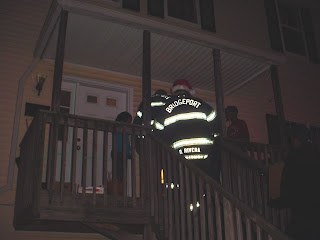 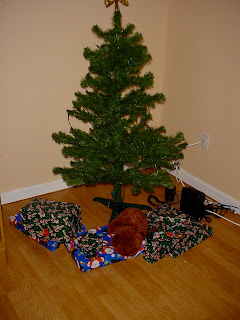 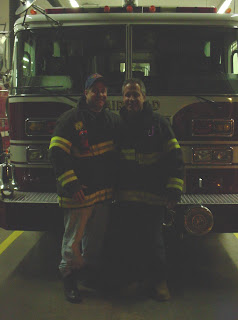 Posted by Mike Lauterborn at 10:01 PM No comments: 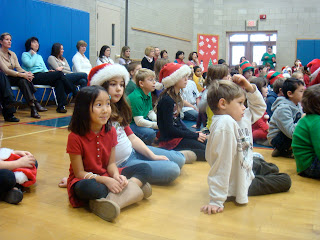 Surprise performance wows
Mill Hill students and staff
(Posted to
Fairfield.Patch.com 12/21)
By Mike Lauterborn
© 2010. All Rights Reserved.
12/21/10
Southport, CT – It seemed like just another annual holiday school sing-along until a gregarious woman wearing a red boa jumped up and started swinging her hips and gesticulating wildly. Surprisingly, a pack of students, many of them wearing elf and Santa hats, sprang to their feet and joined her.
The site was Mill Hill School at 635 Mill Hill Terrace in Southport and the event was the annual holiday sing-along, held mid-morning Monday in the school’s gymnasium. Traditionally, students and staff gather to entertain one another with classic holiday music. This year, 3rd grade teacher Joan Hellthaler had a little surprise in store for everyone.
The event agenda seemed like the usual fare at first, with the exception of the 5th grade band, under the guidance of Band Director Linda Zwickler, which serenaded the classes as they entered the gym and the children took seats on the floor in designated areas. Amie Arcari, the music teacher and chief coordinator of the event, had asked the band to participate as a “low-key opportunity to get in front of their peers and perform,” she said. All the band students are first year and started in September with their instruments.
Despite the band’s atypical presence, things still seemed par for the course. Principal Kevin Chase welcomed everyone – some 470 students -- noting, “This is your show. It’s all about you. We’re celebrating ourselves as students and Southport families.” He admired the students’ job respecting each other.
Arcari said her bit as well. “Good morning Mill Hill! Here we are at the big event that we’ve been working on for weeks.”
As in past years, the kindergarten class under the leadership of Miss King kicked things off, with “Dreidel Dreidel” and “Up on the Rooftop”, acting out all the action. Then it was the first graders’ turn with “Burn Little Candles” and “It Must Be Santa” with piano accompaniment from Arcari.
The 2nd graders were next up with “Oh Hanukkah” and seemed ready to launch into a second number when, all of a sudden, “All I Want For Christmas is You” began playing and Hellthaler burst onto the floor. Her class of 18 joined her and they performed what seemed to everyone in attendance to be a spontaneous, ambush dance and song set. Special Ed teacher Ike Nwagwu and 4th grade teacher Dennis Boskello accompanied on bongos.
“I think we’ve just been Flash Mobbed!” said Alcari to the crowd as the group finished and retook their seats, to much applause and surprised cheers from the gathering.
Hellthaler let Patch in on the secret. “We had been watching some Flash Mob performances online at snack time and the kids were very animated about them. I have a couple of dancers in my classroom and they thought about what they could do. Two weeks ago, we began doing our own choreography.” The goal was to create an unexpected “happening” in the middle of the traditional holiday performance.
“You’d be surprised about some of the moves the kids wanted to do,” joked Hellthaler. “I had to say ‘inappropriate’ a few times. We practiced in secret three times a day with the blinds drawn and paper over the doorway window. I was glad the boys were as enthusiastic. You don’t want to make them do it if they don’t want to.”
The response to the “ambush” was universally positive. “That was fantastic. We didn’t expect it. It adds to the show,” said math and reading support teacher Nora Zilliox. “It looked like they were having so much fun!” added paraprofessional Nancy Albert.
“It was great,” said special ed teacher Katie Cronin. “Joan’s always very enthusiastic with her students. I wouldn’t expect anything less from her!” 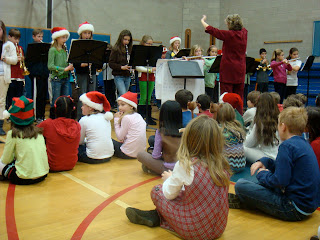 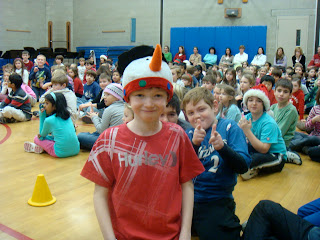 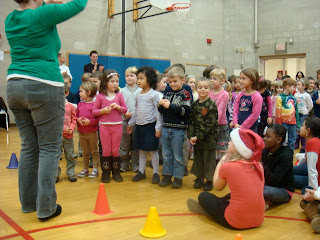 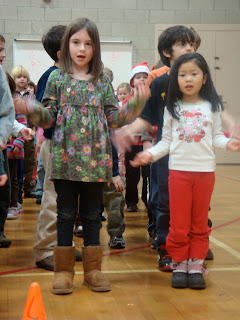 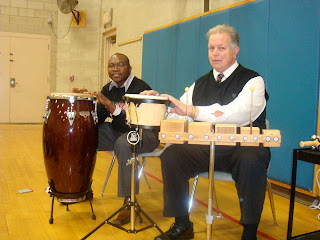 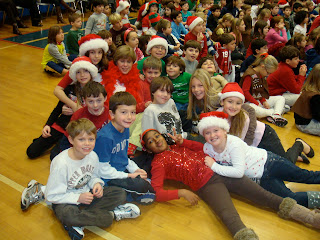 Posted by Mike Lauterborn at 1:47 PM No comments: 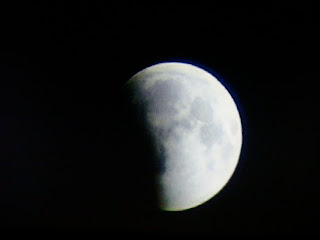 Fairfield Dad and sons monitor Moon’s passage through Earth’s shadow
(Posted on
Fairfield.Patch.com 12/21)
By Mike Lauterborn
© 2010. All Rights Reserved.
12/21/10
Fairfield, CT – So the plan was to catch the much talked about Solstice Lunar Eclipse live, without having to step outside into the late December bitter cold. That’s what my boys and I had decided and here’s how the plan unfolded...
As it was Monday and the lads, Phil, 11, and Evan, 15, had school the next day, it was agreed I would stay up and wake them at 1:30 a.m., the official start of the eclipse.
Sipping apple cider, munching on a block of cheddar cheese and channel surfing, I passed the time as they slept.
At the appointed hour, I went to wake them but one had set an alarm and they sprang to life on their own. We piled into our west-facing second floor bathroom and peered up through the window in the direction of the Moon.
Unfortunately, clouds swirled about up there and obscured the view, and the condition only got worse. We decided to employ technology.
Scrambling downstairs to a kitchen computer, we brought up NASA’s eclipse page, but that offered a blank screen only. Way more helpful and crystal clear was WPBT Channel 2’s live feed out of Miami.
As the time span of the eclipse was so lengthy, we decided to check on it at 15-minute intervals. Our first check was at 1:45 a.m. and a quarter “bite” had been taken. By 2 a.m., half the moon was obscured. By 2:15 a.m., nearly three quarters.
At 2:30 a.m., the Moon, as the eclipse was almost complete, had taken on a reddish glow. That was very surprising and exciting.
We flicked on our Christmas tree lights and tuned the TV to holiday music in celebration, and continued to monitor… Phil and I anyhow. Evan had seen enough and returned to his warm bed. Phil curled up in a SpongeBob Squarepants blanket on a living room couch between screen checks.
At each key interval, I snapped a photo of the screen and occasionally we would review the shots to see the event’s progression. It was much easier to see the passage than in real time, which was like waiting for a pot to boil.
At full eclipse, the Moon was glowing – a mix of burnt orange, white and a tinge of blue along the right side. This was about 2:45 a.m.
“It sounds so cold out there, Dad,” Phil remarked as we listened to the wind howl outside. Temps had fallen to 28 degrees but really felt like the teens with the wind chill. We wondered how anyone that had planned to be outside was faring. Just the thought made us break out hot chocolate mix and put milk on to boil.
Phil’s attention had waned by this point as he found “Back to the Future” on the tube. I was starting to lose interest, too, as the pattern, by 3, seemed to have paused.
A fire engine, not in any hurry, passed our Fairfield Beach area house, headed toward the ocean. We wondered if there were stargazer fans on the force that had decided to make a waterfront foray to see the celestial event.
By 3:15 a.m., we called it a night, our eclipse curiosity satisfied. We were glad we had experienced this dual lunar eclipse / solstice moment, a memory that would last for years to come. 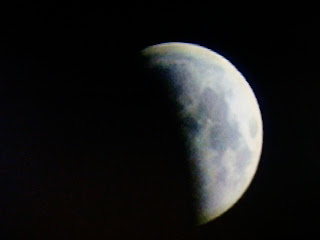 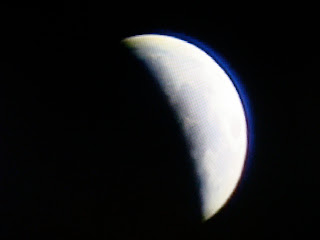 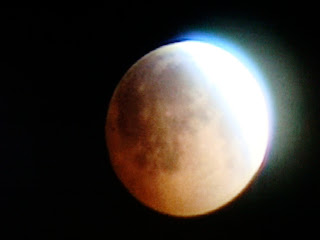 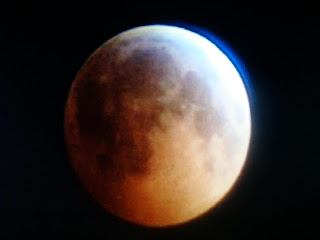 Posted by Mike Lauterborn at 9:25 AM No comments: