FLHS Seniors and Faculty Strike a Pose at FTC 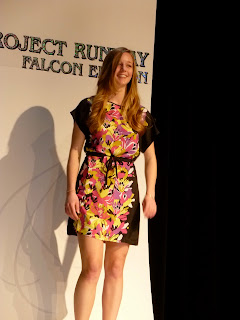 FLHS Seniors and Faculty
Strike a Pose at FTC:

Project Runway raises funds
for school activities
(Posted to Fairfield.Patch.com 3/14)
By Mike Lauterborn
© 2011. All Rights Reserved.
3/13/11
Fairfield, CT – To a soundtrack of hip beats and emcee introductions, they took their turns on the catwalk, cavorting in casual wear and rocking gowns and tuxes. Donna Karen herself would have been proud.
The event early Sunday afternoon was the 4th Annual “Project Runway: Falcon Edition” fashion show presented by the Fairfield Ludlowe High School PTA at Fairfield Theatre Company, 70 Sanford Street. FLHS seniors and several faculty members modeled the latest casual and formal attire from sponsoring local merchants Sym’s, La Moda Fashions, Mitchell’s, GAP, Sposa Bella, Jennifer Butler and Teen Scene. Additional event highlights included a performance by FLHS’ own Close Harmony a capella group, passed hors d’oeuvres prepared by the school’s culinary arts students, photo students serving as paparazzi and a raffle for more than two dozen gift baskets. Monies raised help fund FLHS junior and senior post-prom and related PTA activities.
“This really highlights all the wonderful things we do at FLHS,” said Runway co-chair Patricia Perrazzini, who led the event with Donna Boyle and Ann Roach. “Last year we raised just over $6,000. We’re hoping for a little more this year. The models are very excited and the committee worked very hard. This is one of my all-time favorite events and I’m thrilled to be here.”
Helping make much of the event happen backstage was FLHS mom Teresa Boyd. In addition to her chief role as model coordinator, Boyd handled all the arrangements with the participating merchants, fittings for the students, salon prep for the girls, runway scheduling and development of the emcee script.
“I did this last year,” said Boyd, who was a professional runway coordinator in NYC in the 80s. “It’s so much fun. What I really like is the representation of all the different kids and activities, which showcases some of the programs at the school. With some of the teachers also emceeing and modeling, it becomes a universal event.”
Chemistry teacher Fred Vitale was one of the faculty models, sporting Falcon athletic wear. “This is my first time doing this,” he said. “A number of my students are in this. I know my runway work today won’t lead to an alternate career. It’s a good laugh and for a good cause. The worst that will happen is if I trip and fall. I’ll hear about it Monday. It’s fun to see the kids dressed up and out of their sweats and pajama wear.”
Runway committee member Claudia Elmslie was another backstage face, rooting the kids on. “This is an exciting time for the kids and a great, fun way to raise money. They have such a good time,” she said.
Social studies teacher and head coach of the boys lacrosse team Chris Parisi served as emcee – a return appearance -- and immersed himself in the role. “Last year, I was the rookie,” he said. “It shows you how desperate they are. But they know I’m also very fashion conscious, with my own brand of sports apparel, Turf Dawg USA. I’ve actually used some of the kids as models for t-shirts. This is such an incredible effort. The whole school comes out. We all pool together as a community. You get the best public schools have to offer. It’s great to see these kids rise to this mature stage.”
After the 16-member a capella group, led by FLHS choir director Kevin Cotellese, performed renditions of “Hey Soul Sister”, “Send Me On My Way” and “Animal”, the runway event commenced. The show was divided into two parts, with casual wear modeled first and formal wear second. At intermission, culinary arts students passed finger foods.
Parisi’s commentary was laced with humor, detailing each model’s outfit but also profiling the model. The accompaniments, in effect, were send-offs as the seniors close out their time at FLHS and look ahead to college.
A typical intro was that attributed to Bobby Murphy. “’Sweet Stuff’ is wearing an Etro woven sportshirt with Diesel jeans and a blue sweater from Mitchells, a great casual outfit that works for anyone,” Parisi read. “A member of the Championship co-op ski team, he enjoys pasta and the challenge of trying to sneak into the Library Media Center at Ludlowe without a pass. Bobby will be studying business at the University of Alabama in the fall.”
Students and faculty ran with the playful script, adding flourishes to their turns, nods to the full house and interactions with each other. It was clear the models enjoyed their flashy fame and would long remember the event as a highlight of the rapidly closing 2010-2011 school year.
Posted by Mike Lauterborn at 8:25 AM No comments: