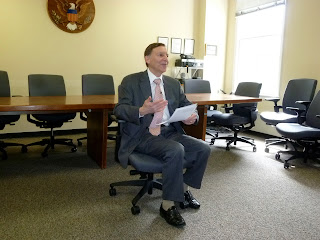 (Posted to Fairfield-Sun website 3/22)
By Mike Lauterborn
3/22/11
Fairfield, CT – At a hastily assembled press conference at Sullivan Independence Hall Tuesday morning, First Selectman Kenneth Flatto announced that he would accept an appointment by Governor Dannel P. Malloy as Executive Director of the Division of Special Revenue and leave his First Selectman position. His new role will entail managing various special revenues and regulating legalized gaming in the State of Connecticut, including the Lottery, Foxwoods and Mohegan Sun. Democratic Selectman Sherri Steeneck will assume Flatto’s current role in April through the November election period.
“I’m very excited about this but it’s one of the hardest decisions I’ve had to make,” said Flatto, adding that he will start his new job toward the end of April. “It’s been an absolute pleasure to serve as First Selectman for the past 12 years and on the board for the past 16 years. I love this job and I love the town of Fairfield.”
Flatto said that, in large part, he was favoring re-election, but “the people of Connecticut have a lot of challenges, and the draw to help was strong.” He added, “The tipping point for me was knowing that I would have a chance to be part of a great administration and help the state. I’ve been so impressed by the people they’ve been selecting and think I can fit in well.”
Assessing Fairfield, Flatto said it’s in great shape. “We’ve touched every facet of our town in positive ways and done a lot to shape the future,” he said. “If there was ever a time to move on, it’s when you’re in a good position.”
The First Selectman said he had accomplished 80-90% of the key things he had planned for the town. These include the building and renovation of eight schools, a library, a sewer plant, town’s recreation center and three new parks, as well as the creation of over 120 acres of new open space. Flatto also claimed the revitalization of Fairfield Center, maintenance of the town’s AAA rating, certain neighborhood improvements and implementation of public safety programs.
With regard to unfinished business, Flatto said, “It would have been nice to be First Selectman when the new train station opens, and I would have liked to have shaped the future of the Exide site. I also wanted to take the town website to the next level and make it more functional for townspeople.”
About a new First Selectman, Flatto remarked, “I certainly would want my successor to be competent and do the job right. It’s traditional for the party to make a recommendation. I’ll put my two cents in and make my hopes known. Who’s chosen is up to the people in power when I step down.”
For her part, Steeneck said she would not be interested in the position long-term, though Flatto had every confidence she would do the job well. “I don’t have the time or inclination to continue as First Selectman, but I’m happy to cover during the transition,” she said.
Flatto said that, though he would be moving on to a new chapter, he was not leaving the town behind. “I will make sure the transition is seamless, and while I’ll be a private citizen, I will help my successor in any way I can.”
Looking to his new role, Flatto said he has laid the groundwork already. “I met with the governor last month, and met with staff. I thank the governor and lieutenant governor for their confidence.”
Flatto said the executive director position has existed for the past 20 years but that it is being restructured, and how it works will be determined over the next few years. The pay level is slightly less than his current salary, which he said would be a hardship but outweighed by the opportunity to help the state’s citizenry.
Flatto commended the town for making him and his family, who will continue to reside in Fairfield, welcome. “The citizens of Fairfield have been so incredible to me and my family. The greetings around town and just driving around and knowing the impact I’ve had on the surroundings has been rewarding.”
The First Selectman thought it was interesting that when he first took office, his son Evan was a toddler. “Now he’s a senior in high school and going on to college. Things have come full cycle.”
Fairfield’s first citizen looked forward to his new challenges. “I have the opportunity to be part of a new world, a bigger world, do some great things and impact even more.”
Posted by Mike Lauterborn at 8:33 PM No comments: